Mantelope from Tod Polson on Vimeo.

Above: The "Pilot" episode for "Mantelope".

A long time ago when my pal, Dave Thomas, and I were working together in San Francisco... the studio we were at "requested" that we come up with a new fantastic t.v. show idea. We were too busy with our other projects to focus on something new. So as a joke, drawing on our Wyoming heritage... we pitched the dumbest thing we could think of "Mantelope": Half man, half antelope! ... hunted by "Hunter Jack" who's only mission in life was to cause the "Mantelope" serious harm... and yes, even death!

We pitched the show knowing the studio... and Cartoon Network would never go for it. But to our amazement... everyone involved liked the idea! ... and this is the "Pilot episode" we put together. There was interest in developing the idea as a series... Dave and I developed a number of fun, quirky story plots... then the whole thing got hung up in legal limbo. So for better or worse... this is the end of the story of the "Mantelope". 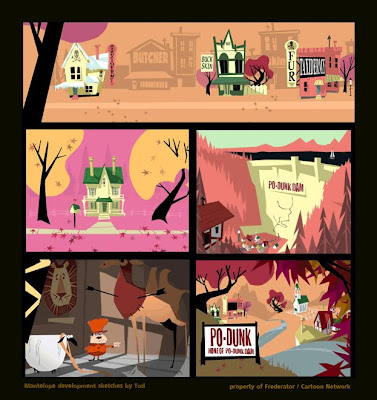 Above: Color keys that would later be reworked in flash.
One of my main tasks was developing the look, and getting the short to be less that 1MB ... so I kept things really graphic and simple... re-using as many elements as possible wherever I could... trees... leaves... etc. Mantelope was our first flash project... Dave, and I would later join Jorge, and Sandra on their flash show "EL TIGRE: The adventures of Manny Rivera". 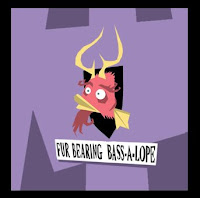 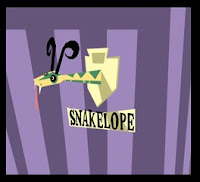