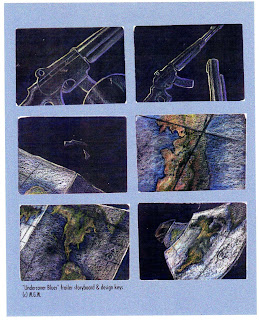 While I was still in college I worked for a small animation company called CimityArts, ran by producer Barbara Cimity. Working in a small studio is the best training a young animator can have... and I recommend it to anyone starting out in the industry.  The fact that the crew is so small, you end up doing whatever comes in the door; animation, design, boards, ... even directing. 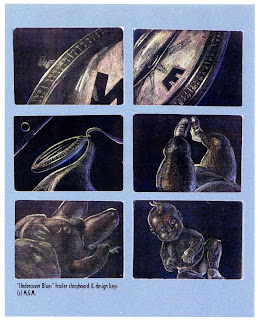 A section from my "Undercover Blues" trailer board.

One of my early assignments was the trailer for the family film "Undercover Blues." (1993) I was asked to art direct, and board the trailer. This was in the days before computers were really part of the production process... so we shot actual objects... and actual baby under camera. We had a "spare baby" stashed in back just in case the first one didn't work out.

During this period I was heavily influenced by the art of the amazing designer, Cliff Boule. Cliff sort of took me under his wing, and showed me the ropes production wise. At the time he was well known for his black paper pencil sketches.

I have a video copy of the trailer on 3/4" tape... one day I hope to transfer my old work to digital media... and will post the video at that time.