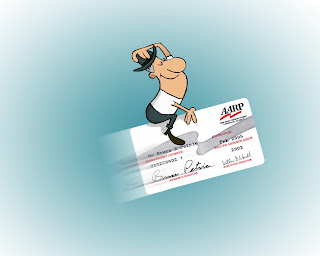 A few years ago I was asked to create some concept art for an AARP commercial pitch. The agency wanted something with... "movement and vigor. Youthful... but not juvenile." So I worked up several approaches... including this one... "Bruce E Petrie... Rocket Man!"
Posted by Tod at 4:44 AM 1 comments


A number of years ago I worked on a show called "El Tigre: The Adventures of Manny Rivera" created by the multi-award winning husband and wife team of Jorge Gutierrez and Sandra Equihua. My main job on the show was creating the color scripts that would help guide the art team.

Though all the episodes of "El Tigre" have a similar feel... I tried to give each episode a unique pass of color that would describe the story and emotions of the characters. Often I would give a "straight" color treatment that I thought would fit the story well... then try another pass of something a bit different. That was the case of episode 013. 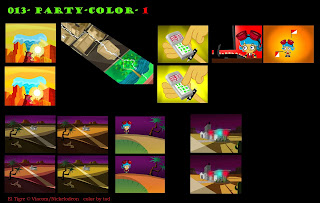 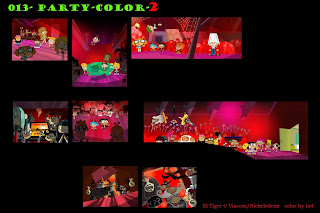 This episode was in fact one of the most difficult to design... just for the reason that there were LOTS of characters. I was very fortunate to have directors that were willing to let me experiment. Most of the time these experiments lead to interesting ideas... and other times... well ... looking back I often wonder what I was thinking about. :)

At the time of this post I am working with "El Tigre" creators Jorge and Sandra (as well as "El Tigre" art director Roman Laney) on Jorge's feature film "The Book of Life." It's been a joy... and we are getting to do a lot of the things that weren't possible in TV.

To see more of my color scripts from El Tigre... please go HERE!
Posted by Tod at 8:16 PM 1 comments