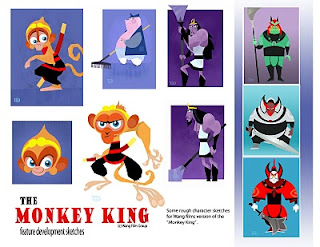 My pal Mark Oftedal and I were asked a while back to do some inspirational character sketches for Wang Films animated feature based on the classic story "Journey to the West" ... or "The Monkey King". Above are a few of my developmental color sketches for the film.

Below: A video of stills from the final film created by Wang Film productions in Taiwan. Mark and I weren't on the production, and had nothing to do with the final outcome. But I think it's interesting to see what the studio did (or didn't do) with our designs. I think the song on the video is from the end title credits of the film.