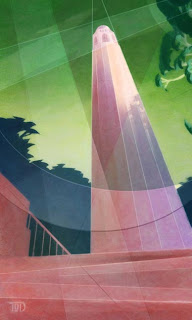 I've decided to post a few of the San Francisco sketches that I've been working on for "Topaz Diary."  Fred Hoshiyama spent many, many years of his life in the bay area, both before and after his camp experience at "Topaz." I've made a number of mood sketches that try to capture the personality of the city.

Above: Depression era San Francisco, top... the way most people saw it, in contrast with the bottom sketch, which is how Fred described the city. "It was like heaven!" He said... "For a nickel you could get in a street car and ride anywhere you wanted in the city. With the flick of an electric switch you had lights!" 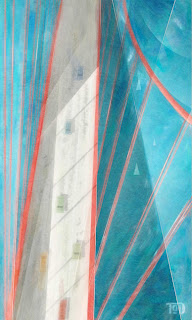 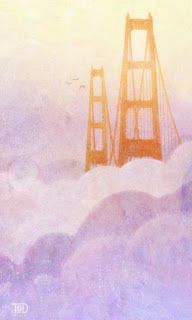 Above:  Two views of the "Golden Gate Bridge."

I'm still searching for the exact style of this section of the film. But I know that I want it to be light, and playful.  Dreamy and optimistic... saturated, and colorful... attempting to depict the way that many young people see the world. I've planned many of my sketches to be low angles looking up. Or  set from a lofty point of view to capture this optimism.

Above: A re-post of a bridge sketch to show the contrast of Fred's world after the attack on Pearl Harbor. The palette of the film will be more somber, and the angles more grounded. This was one of the low points in Fred's life, and I hope to depict that through the art. Fred's life took on a new direction because of the war. In spite of hardship, Fred always found a way to make the best of things, and because of this, discovered  his true calling.

all art copyright 2011 tod polson / Prodigal Pictures
Posted by Tod at 2:28 AM 4 comments