A while back I was working in Beijing, and was asked to make a test for a feature film about Allen Ginsberg's poem "Howl." This was a film to be directed by Oscar winners, Rob Epstein, and Jeffrey Friedman. The look was to be based on the art of illustrator Eric Drooker, who had known Ginsberg personally... illustrating his book "Illuminated Poems."


Above: An early test for "Howl."
A big thanks to Eric Drooker, and Jeffrey Friedman for allowing me to post this test.

The background art in the test is actually from one of Eric's paintings, which has been broken down into layers in photoshop. The character design was intended to give the feel of German expressionist sculpture. The animation, though a bit clunky in the test, was enough to prove to the directors that animation would work in illustrating the poem, and this test would be used to help raise finances for the film. 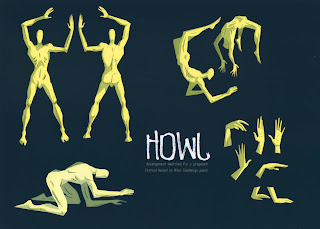 Above: My design for the character. Inspired by German expressionists such as Oswald Herzog.

After a few years, and a few false starts the animation for "Howl" was created at The Monk studio in Bangkok. I would go on to art direct the animation for the film with Eric, and supervise the production in Bangkok. With John Hays serving as the animation director. While the final film would have more bells and whistles than this test. There is something about the simplicity of this that I still like.