Where I'm from in Wyoming, people have traditionally told each other stories to pass long dark winter days. Usually these stories were of things that had happened to them during the year. Though one could never be sure how much of something was the truth, and how much of it was a "tall tale." Many people I knew had not left our town in years, had the most amazing stories of things they had done, and things they had seen. Looking back now, I appreciate how wonderfully creative people in my community are. Some very good memories. 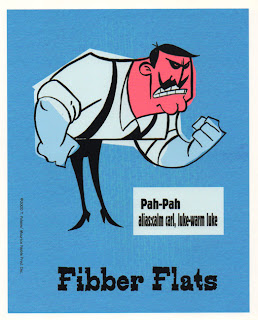 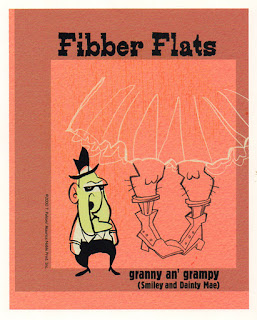 Above: Some character presentation sketches for "Fibber Flats."
Inspired by my up bringing, a number of years back I developed a show idea based on the concept of a community that lived by the code of the "Tall Tale."  This was some time before Tim Burton's "Big Fish" came out. The title of the show was inspired by the name of the area where my family home is, "Poverty flats."  A modest ranching area, rich in creativity, and a wealth of interesting characters.
Posted by Tod at 12:24 AM 2 comments

Children's day was this week. So, in celebration I decided to post a few of my kid sketches. These were made not too long ago as a test for a client who wanted a sort of "cute young boy with a big head." 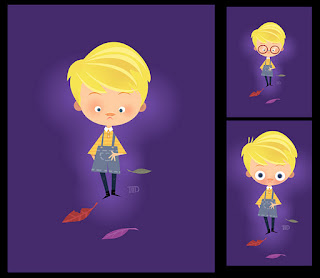 Above: Some variations on the design the client liked most. 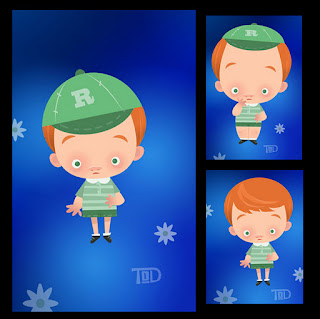 Above: A younger variation 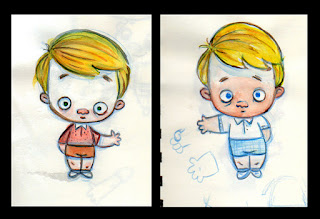 Above: I rarely show my thumbnail and rough sketches, mostly because they aren't designs; they are thinking drawings. But thought it would be interesting to show a bit of my process. Using different ideas from these two sketches as a starting point, I was able to play with variation of shape and proportion in the above digital versions.

I've really wanted to post more over the last few months. But, it's been a crazy year... we've been moving house to Chiang Mai over the last month ... the hard drive that I store my backups died. The biggest task that has filled my every waking hour, has been finishing the text on Maurice Noble's design book. I've found that writing about design is a lot harder than actually designing. I turned in the latest draft of "The Noble Approach" last night, and over the next month will finalize the text with my editor at Chronicle. Pretty excited about it.
Posted by Tod at 7:29 PM 3 comments