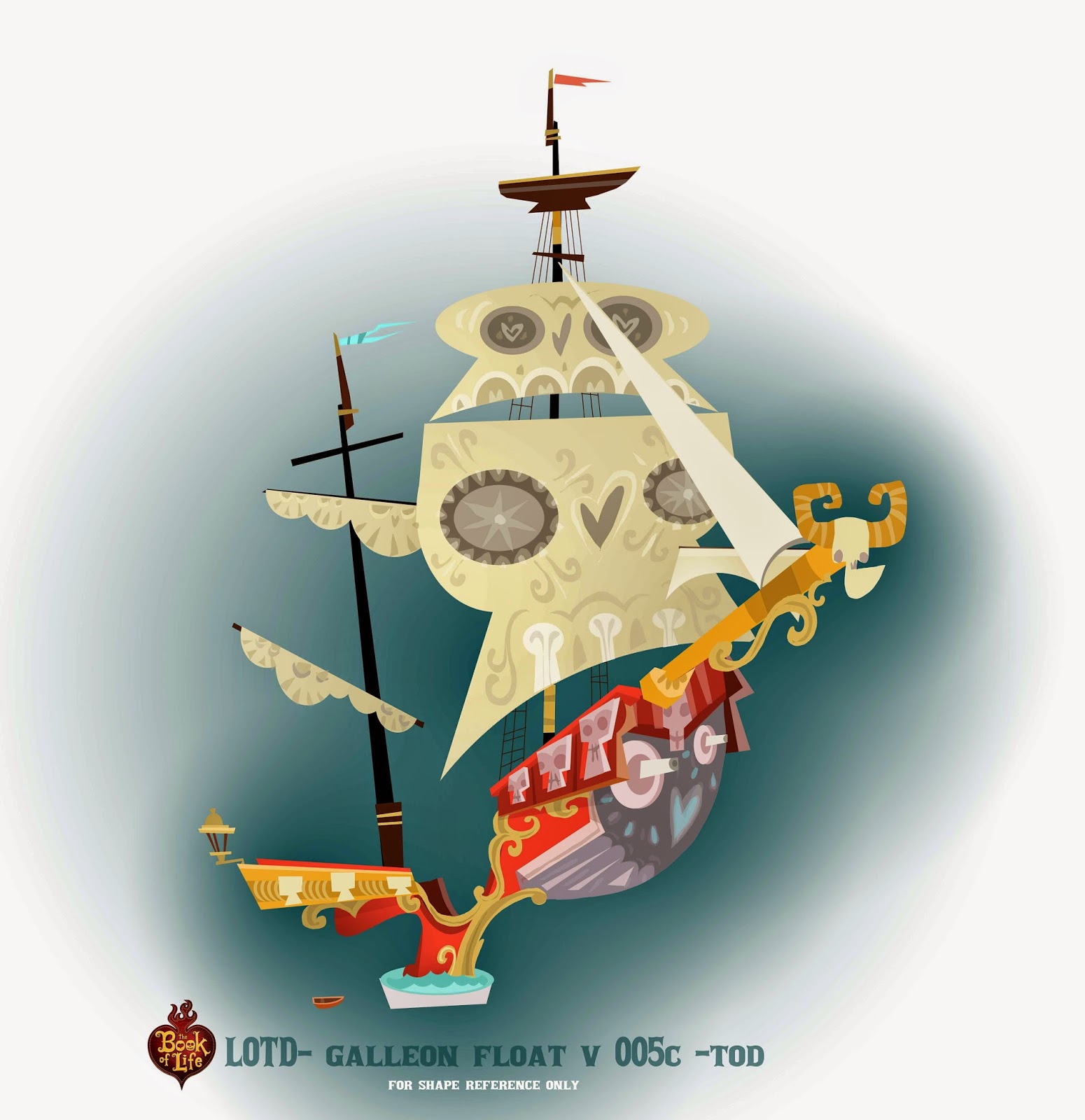 One of the areas I focused on in the "Book of Life" was the festive parade near the entrance to the "Land of the Remembered." Each float in the parade represented a different character from the movie. Here are but a few of the many sketches I made for the Galleon float. 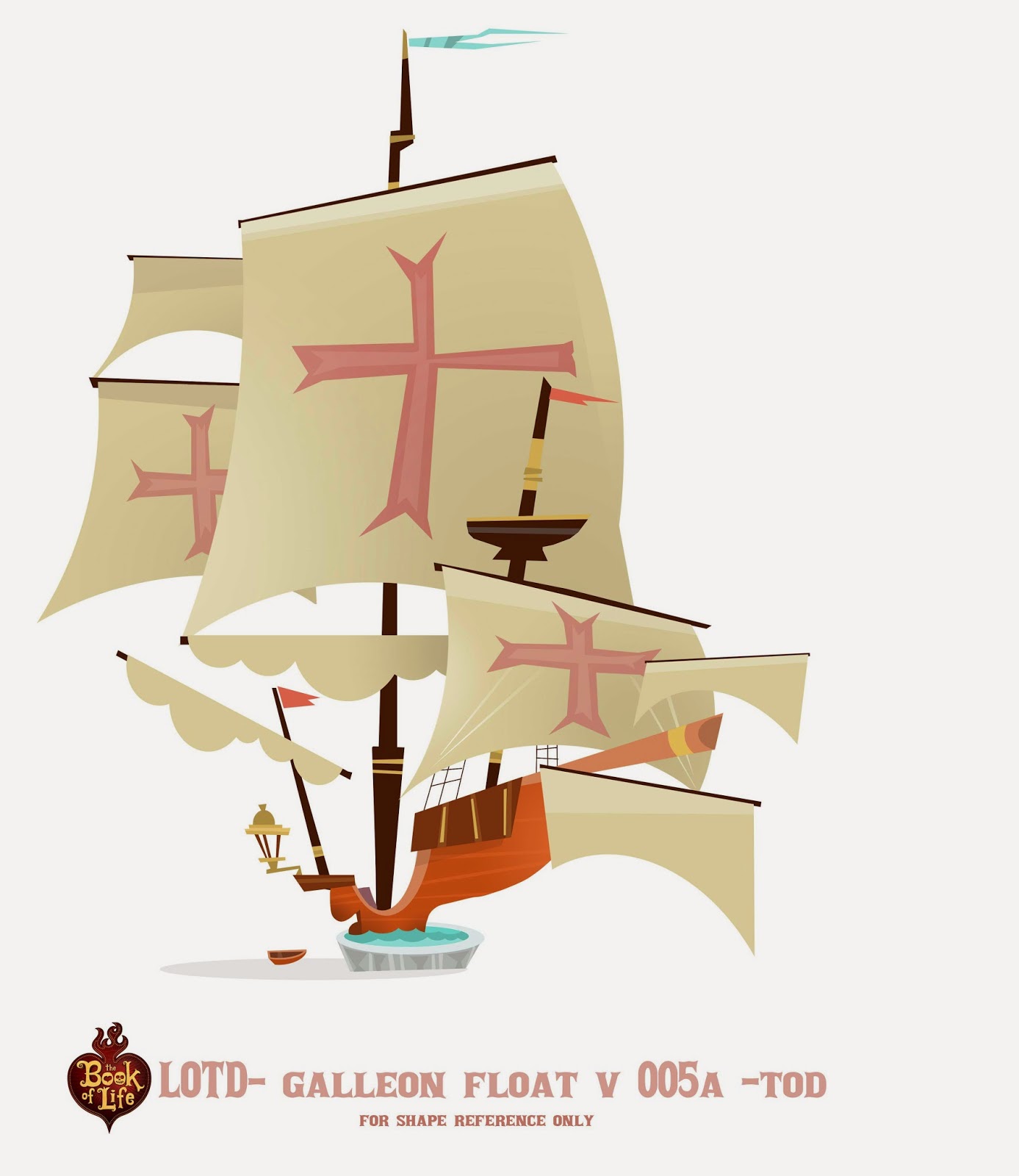 Above: My first sketches captured the fractured quality that the creative leads were looking for... but weren't that unique to the world of the dead. 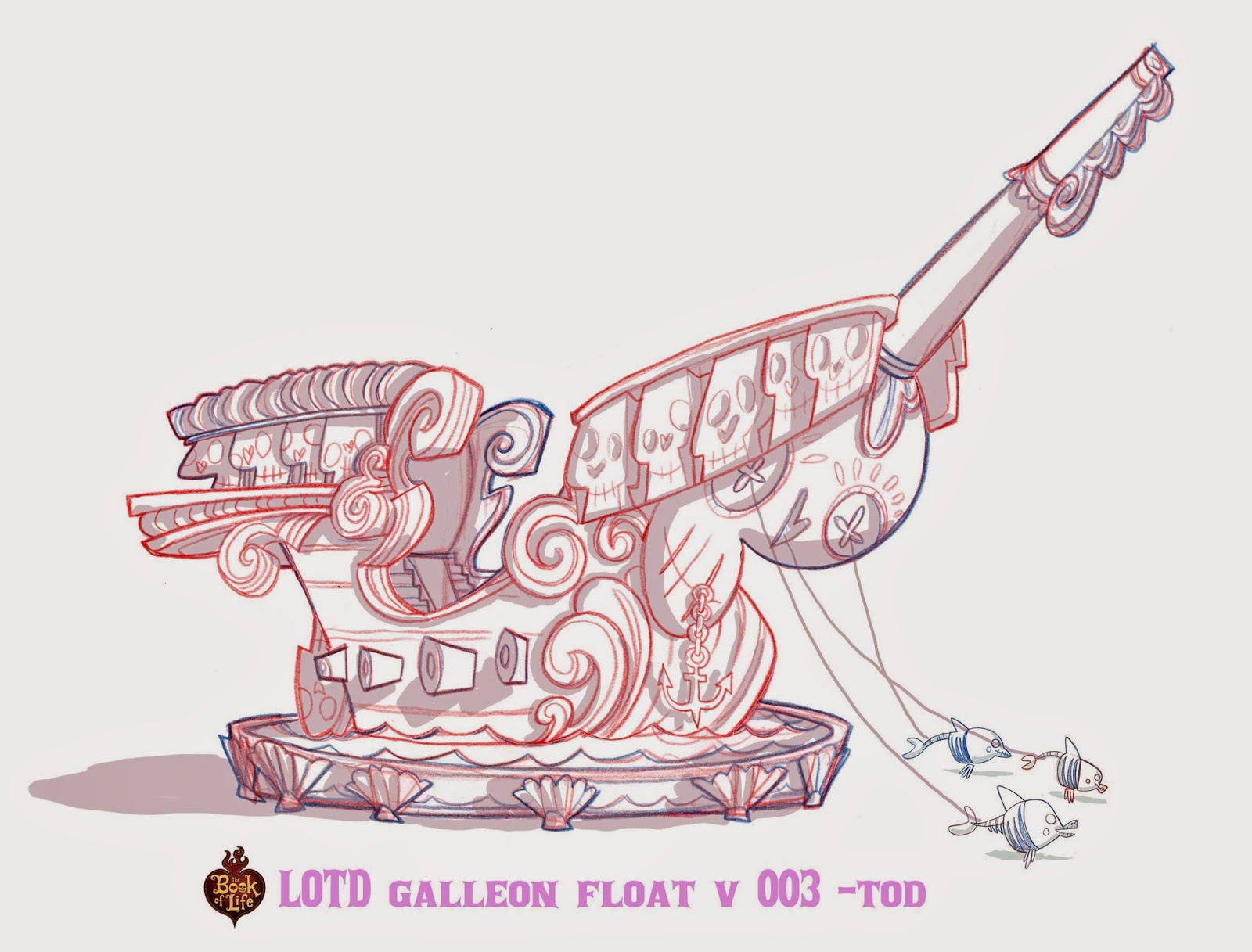 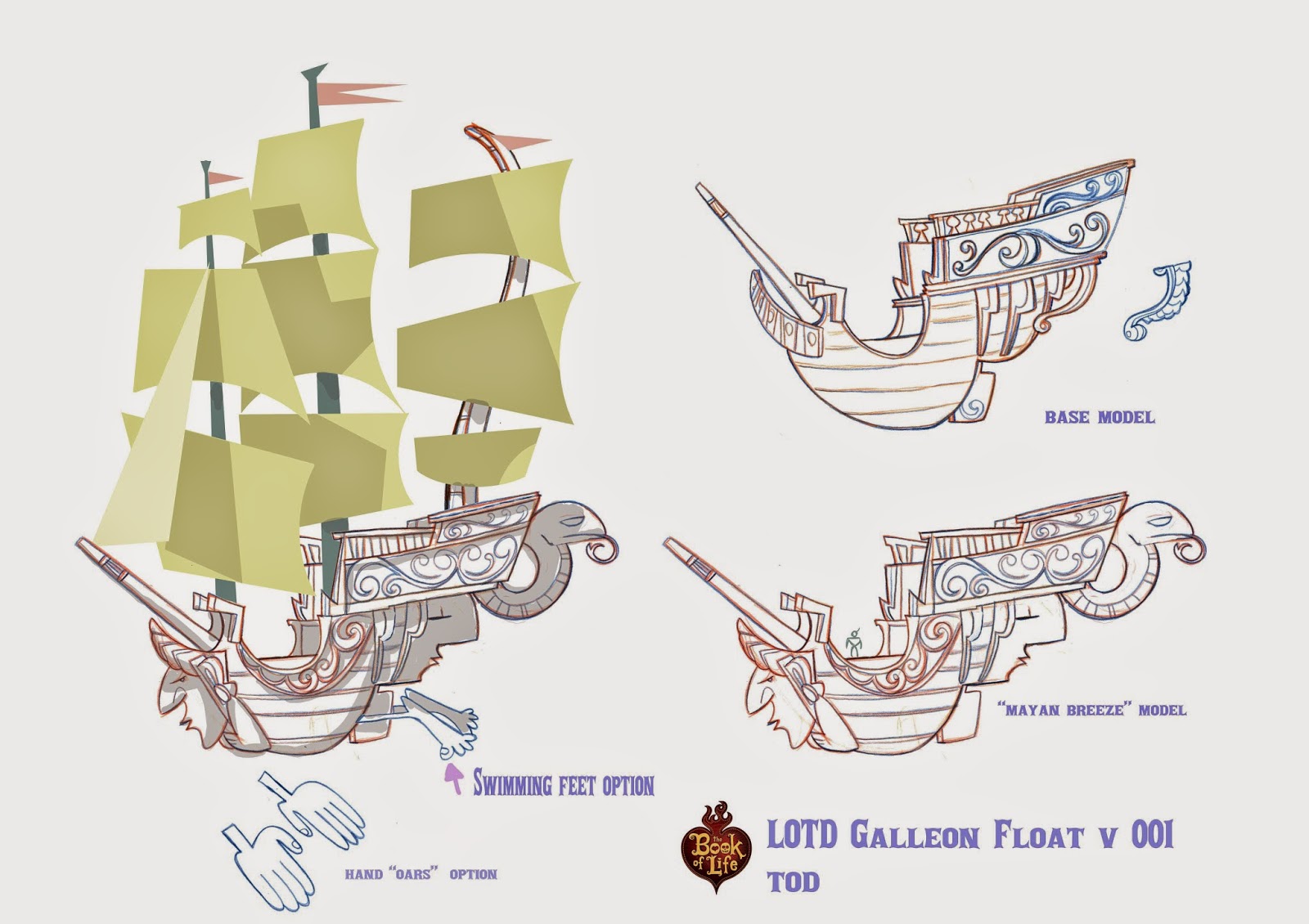 Above: So I played with more ornate versions of the ship. Thinking of it as a character unto itself. 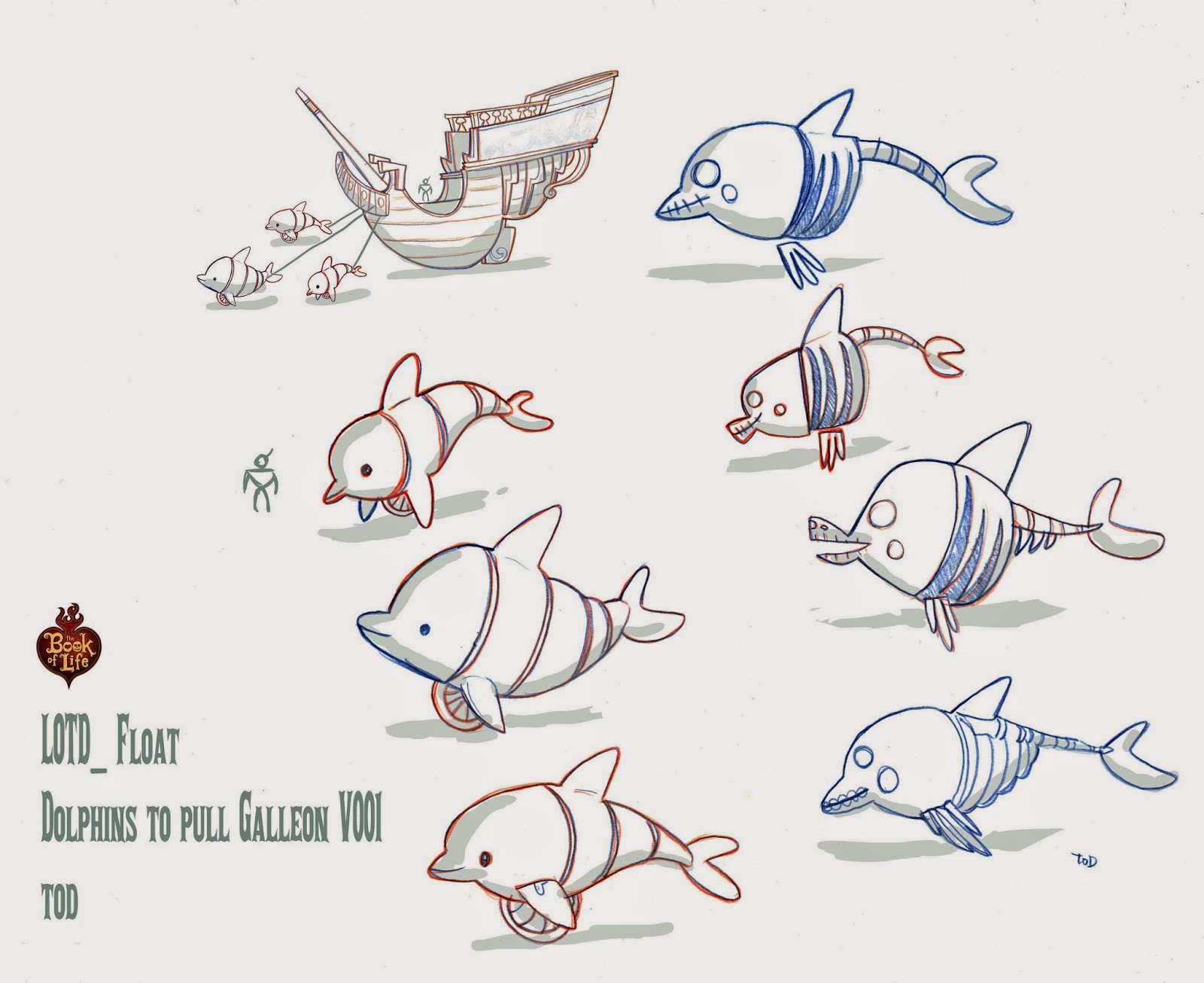 Above: I thought it would be fun to have "dolphins" pull the ship down the street. 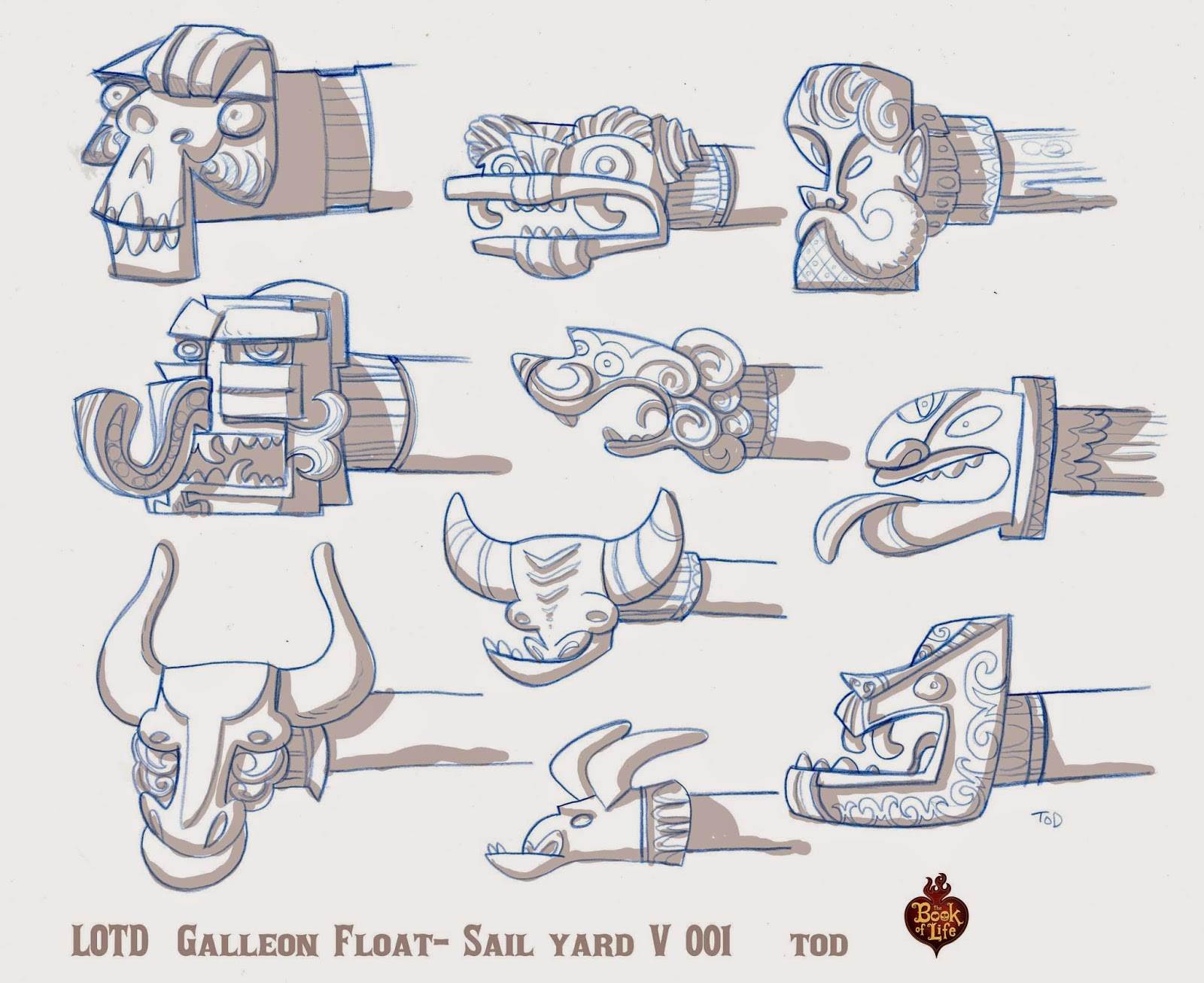 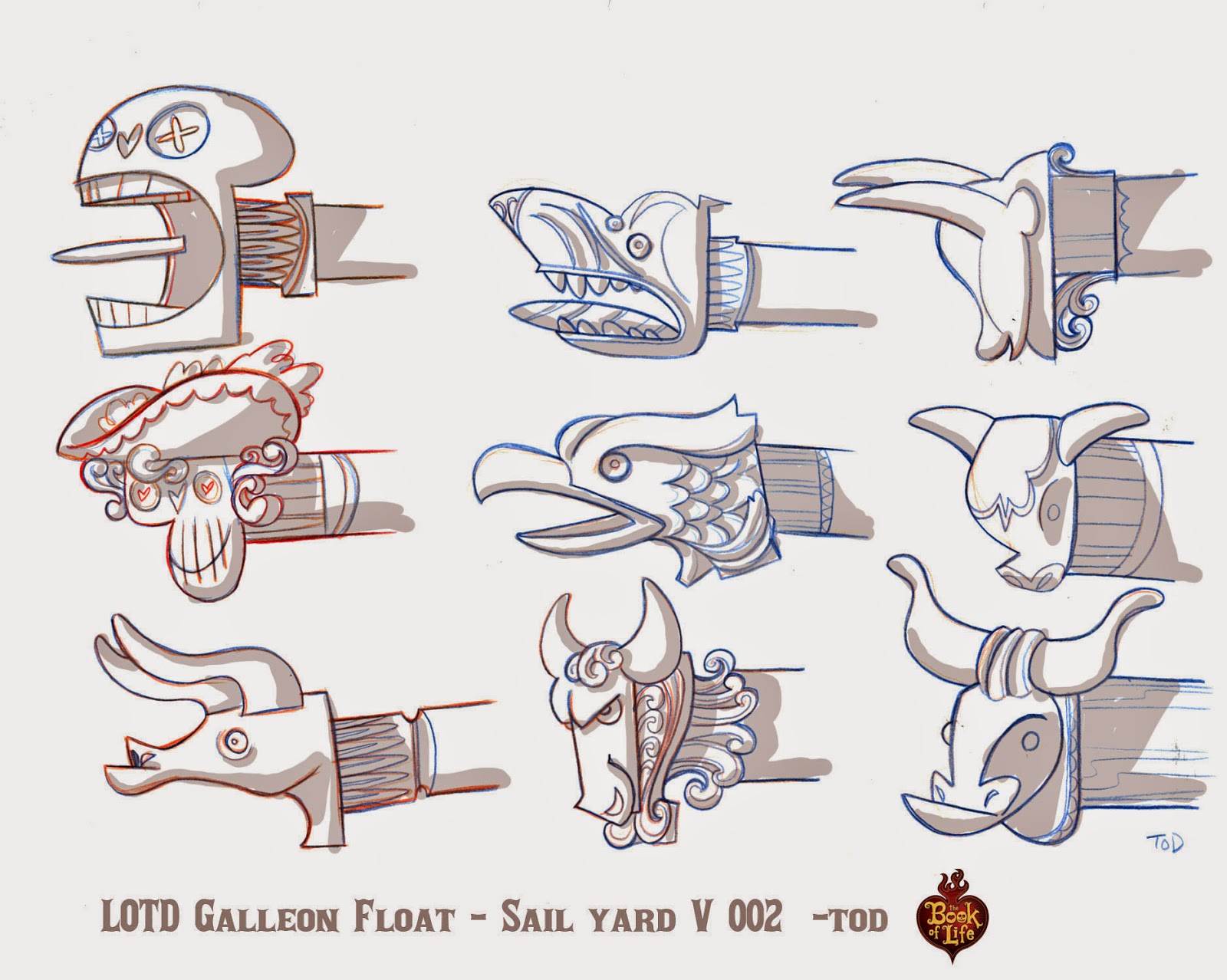 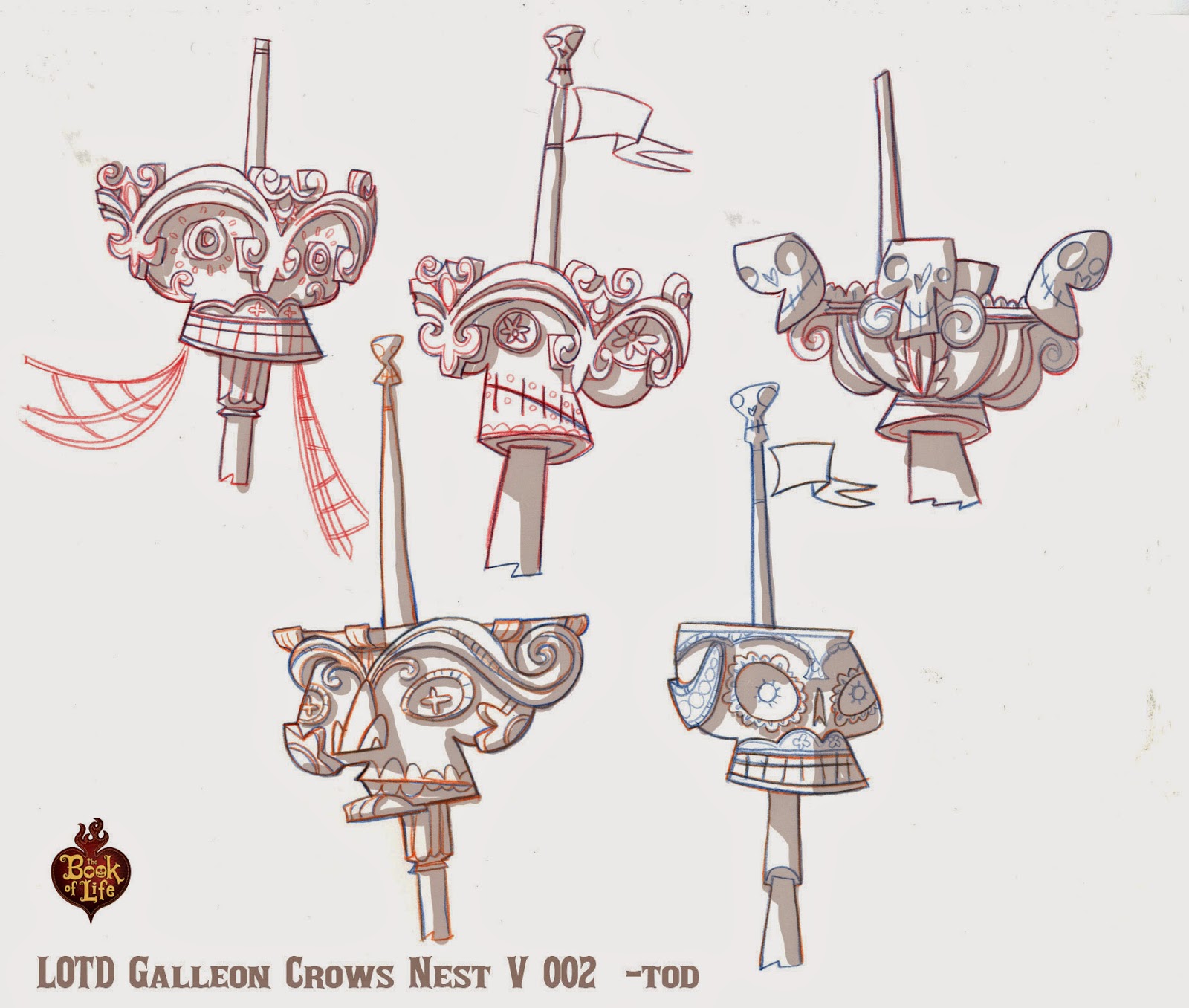 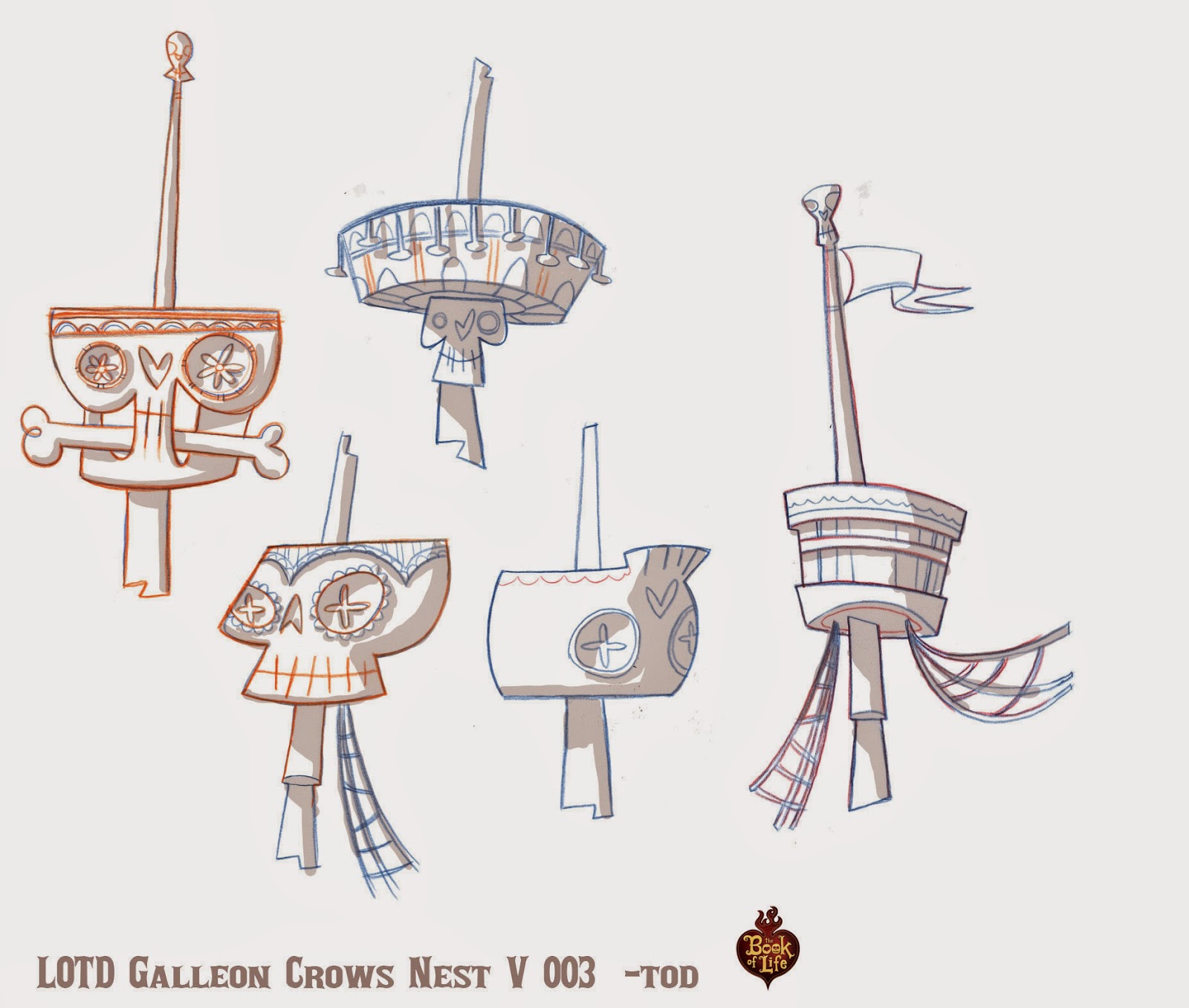 Above: First I focused on the overall shape of the ship. Then I spent time detailing out areas that were important to the story. For example, in one version of the storyboard the hero lands on the ships sail yard, and another character jumps from the crows nest. -tod

Book of Life: Entrance to the "Land of the Dead" 1 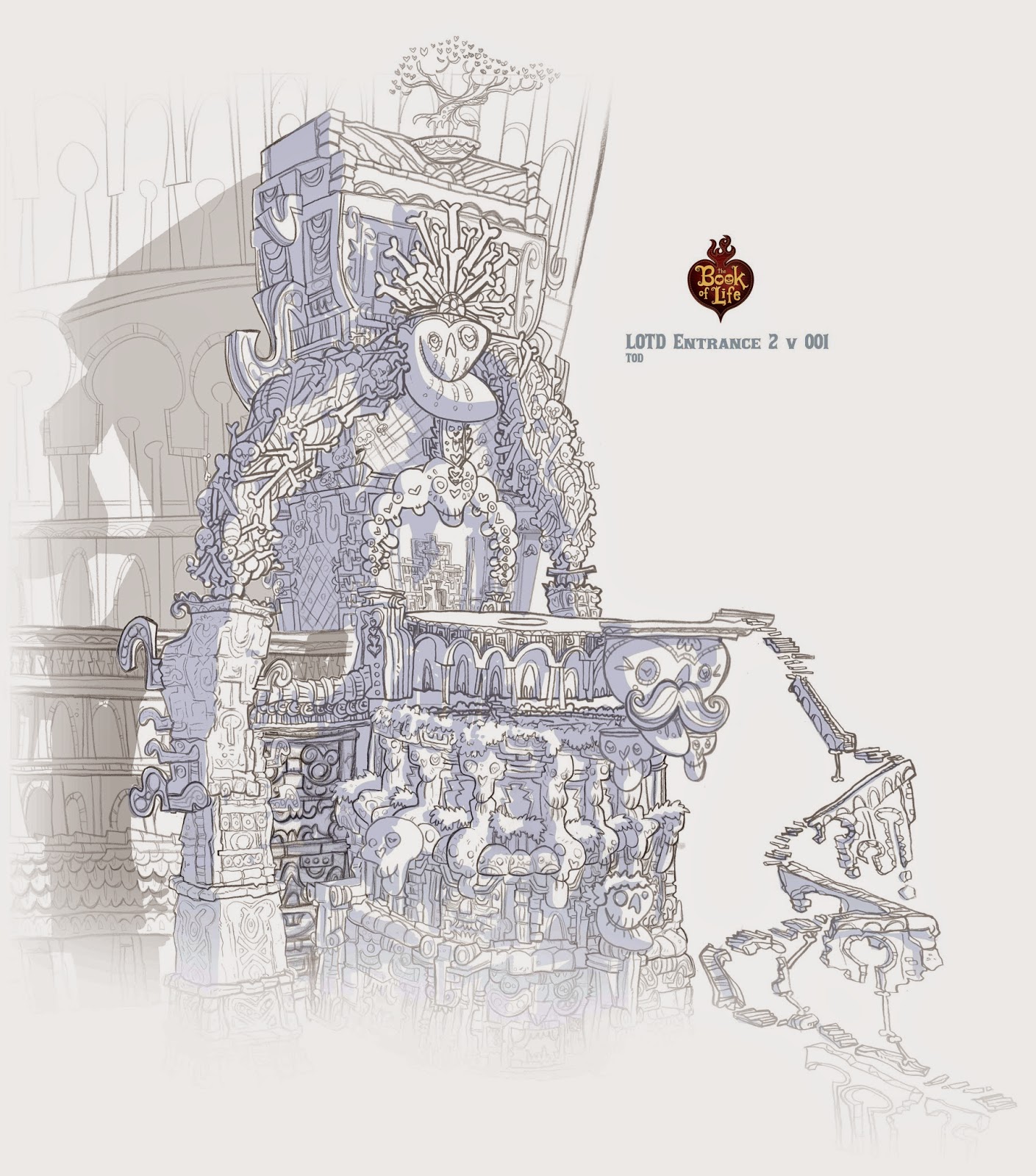 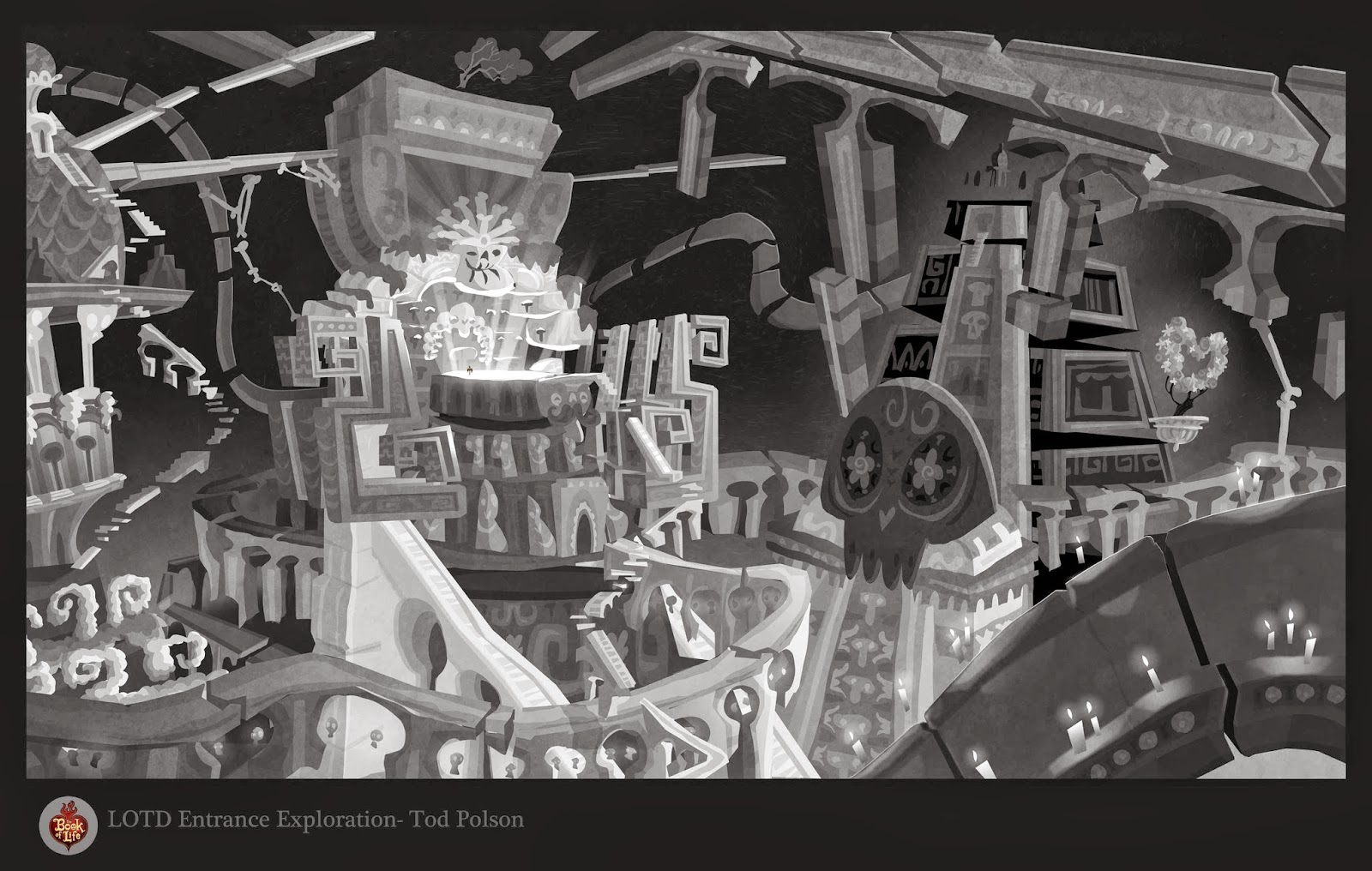 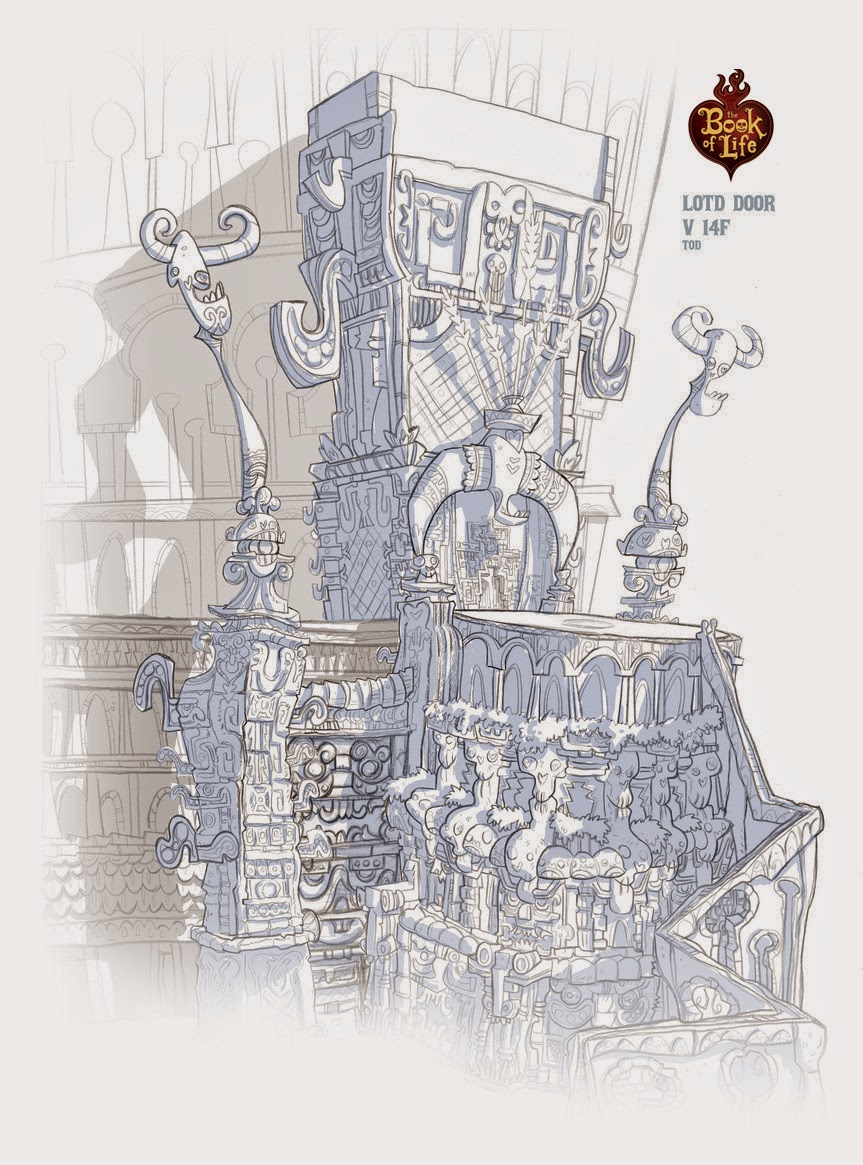 Above: Exploration for the entrance to "The Land of the Dead."

The LOTD, which would become "The Land of the Remembered" was a great place to explore. A place where almost anything could happen. I reckoned that gravity wouldn't act exactly the same way as it did on earth... so played with floating walk ways... upside down roads etc. This land was neither night nor day. There was no bottom or top to this world... it just kept going and going.

In the final movie, the hero comes through a much simpler door... something more parallel with the "Land of the Living." But a number of ideas made it into the overall treatment of the world.

The Book of Life: Fountains 1 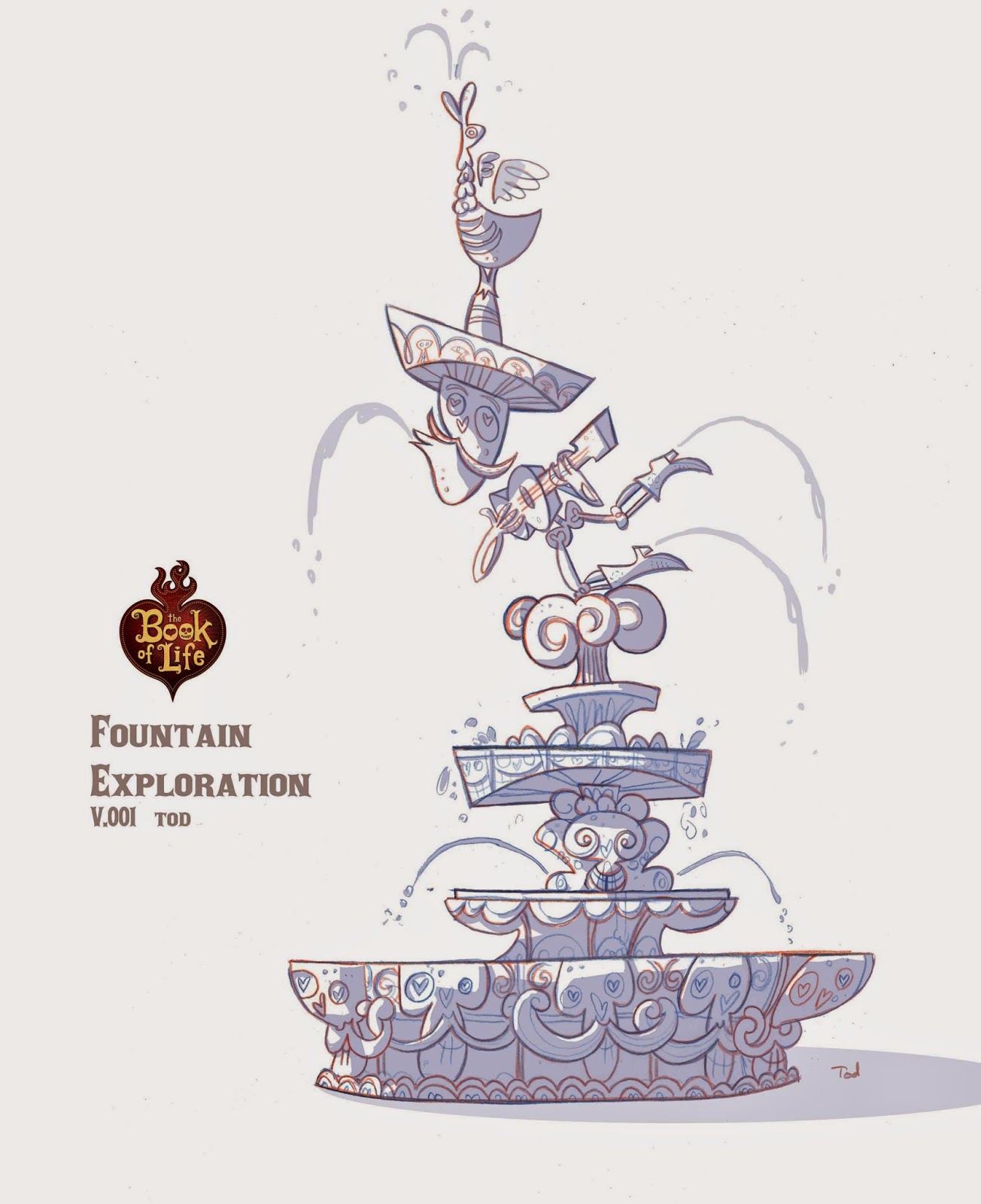 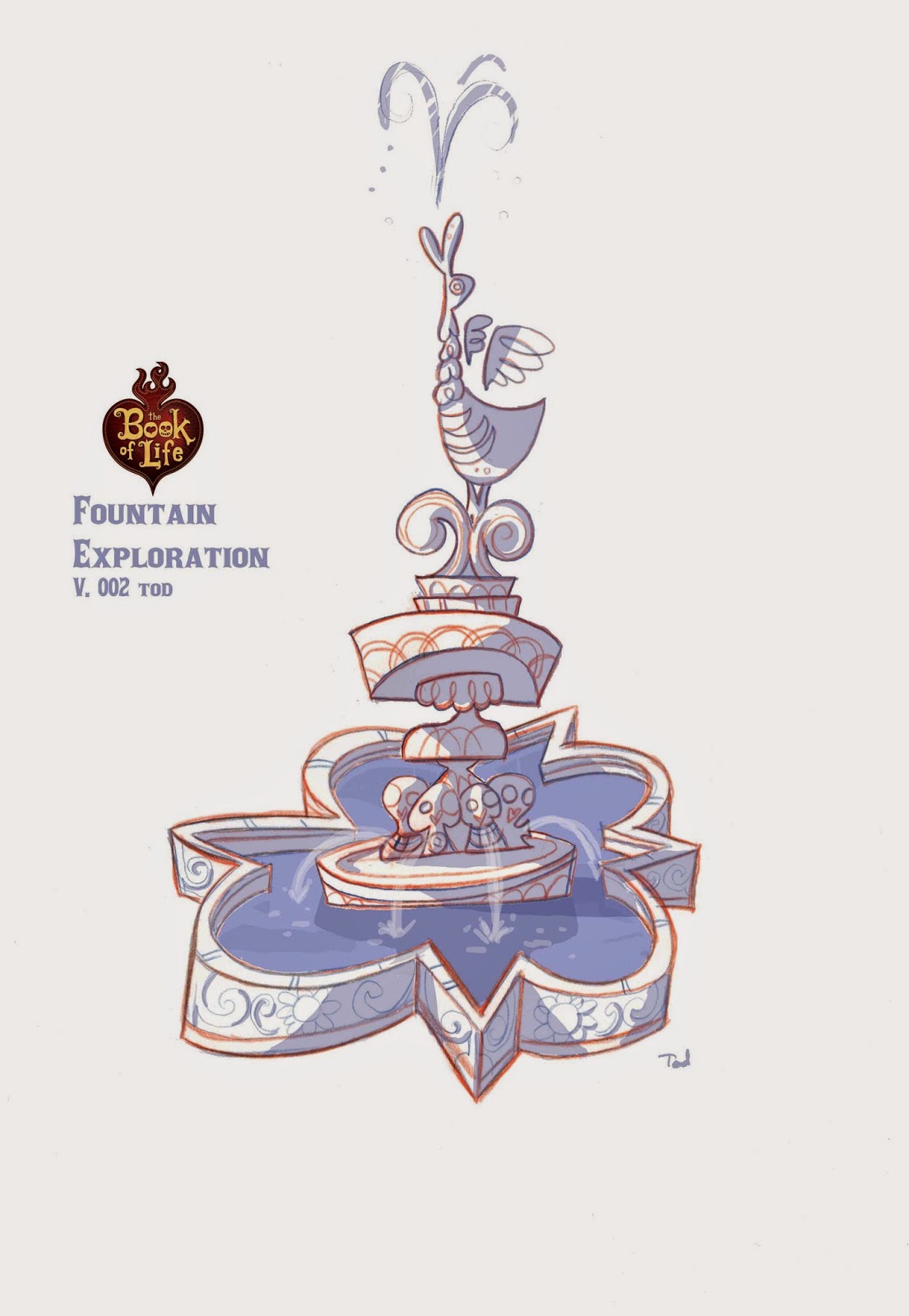 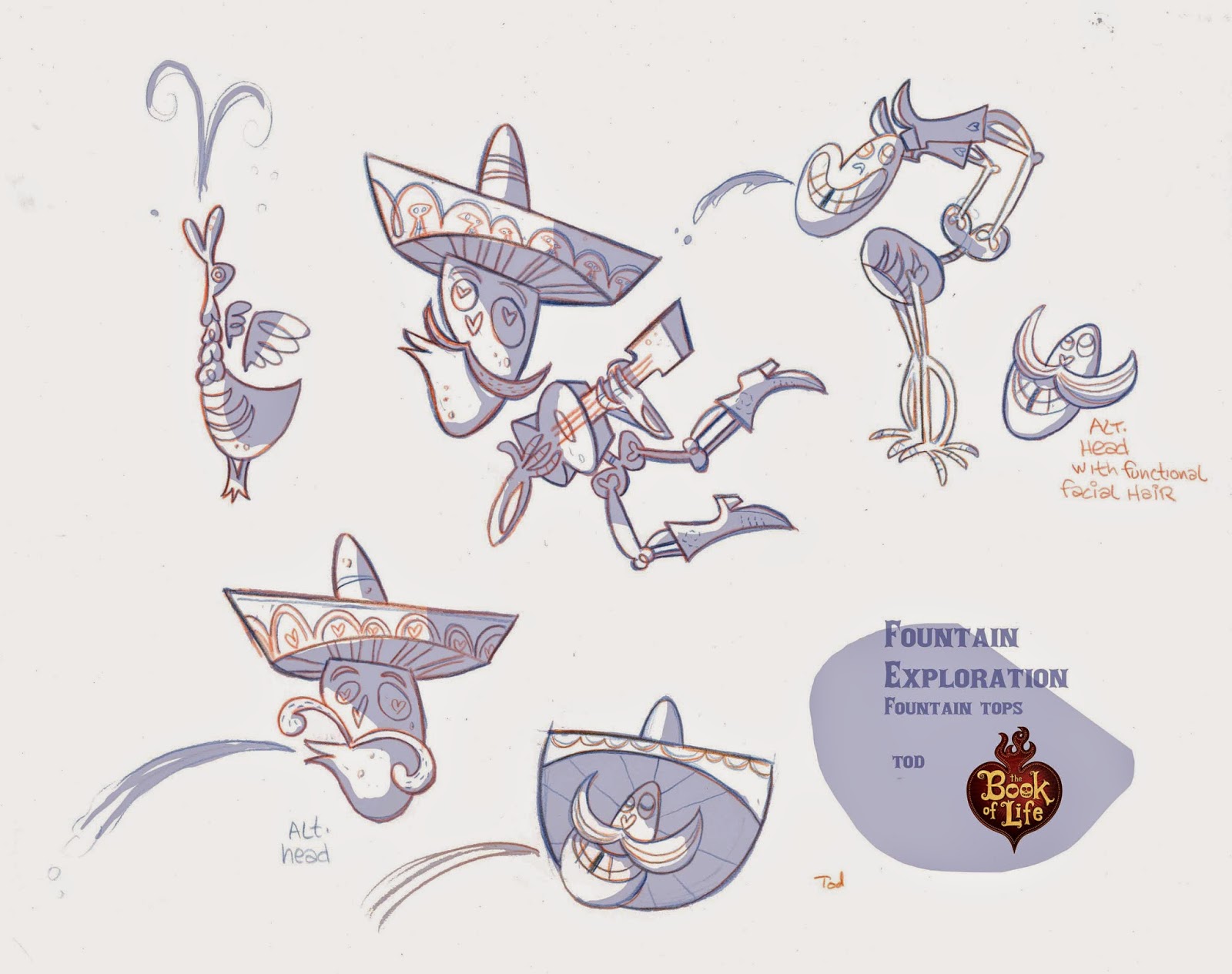 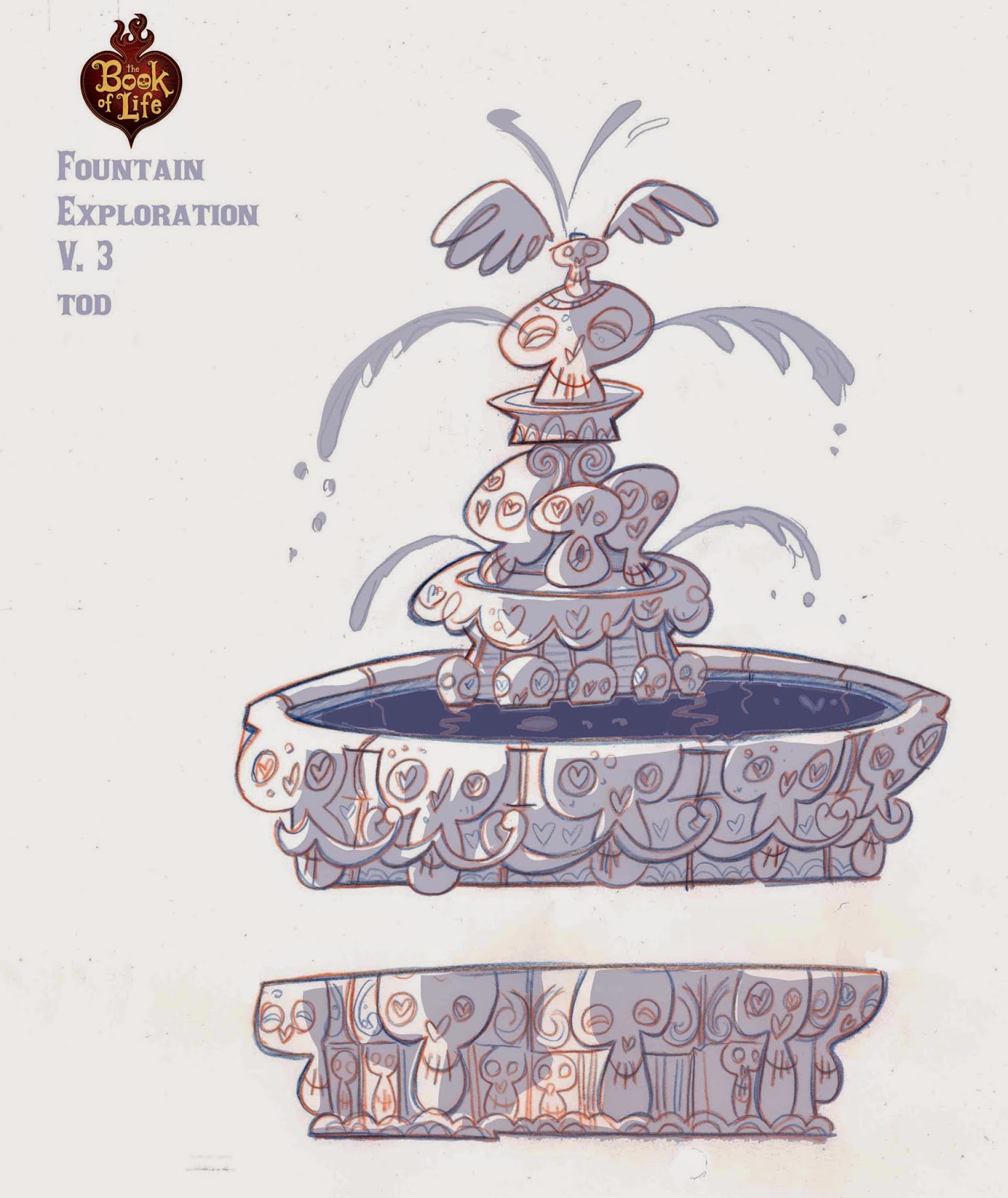 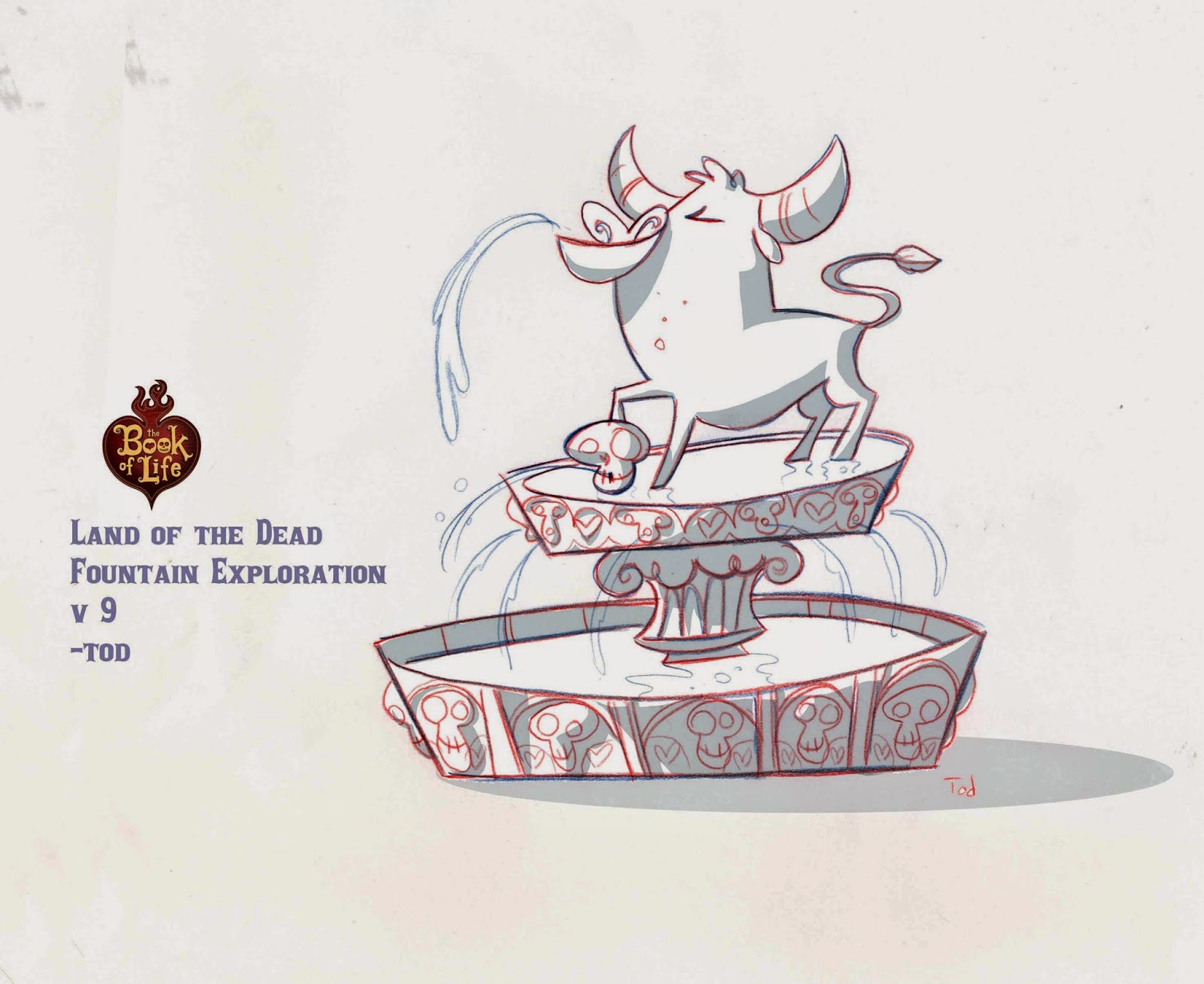 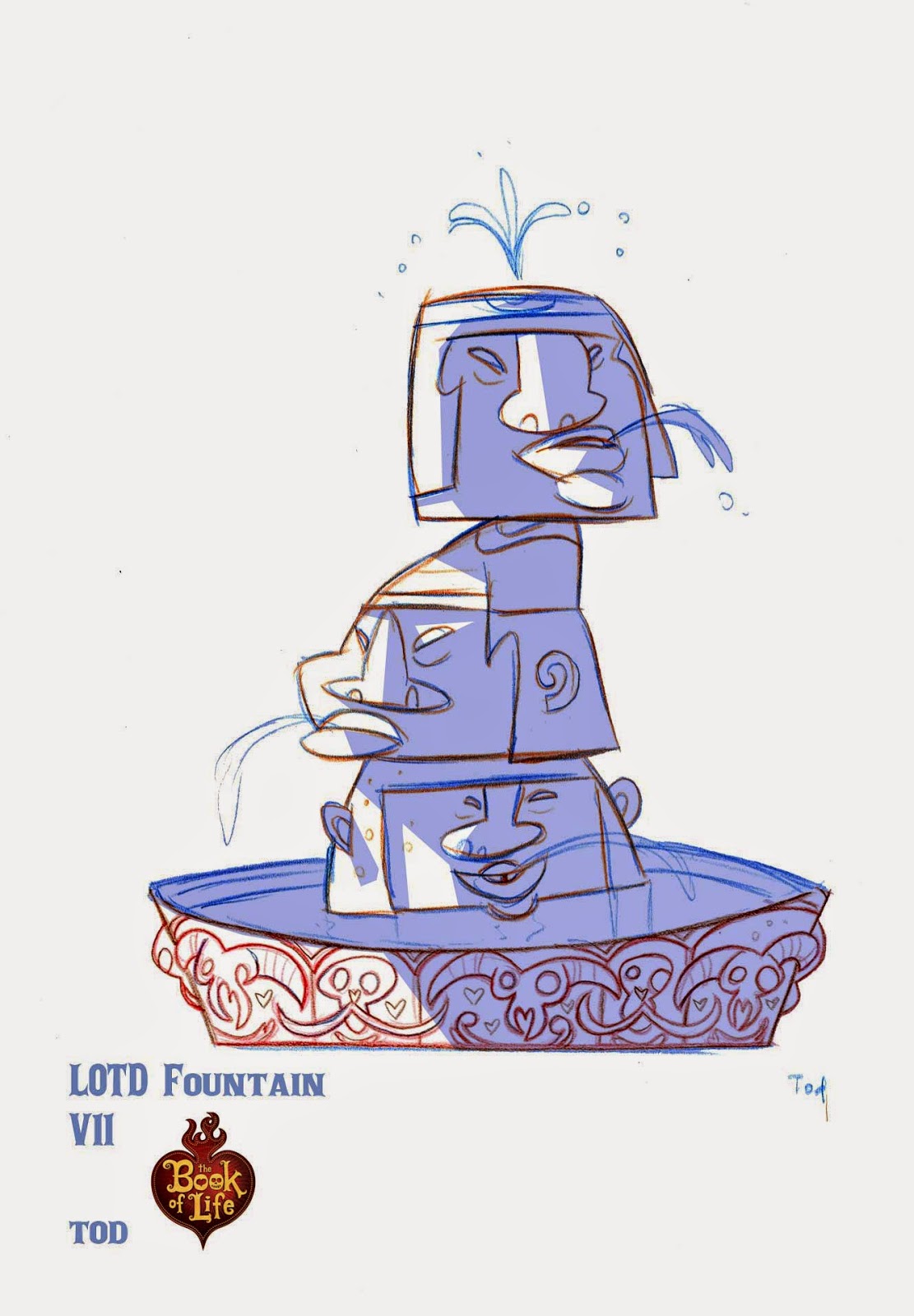 Above: A few of my fountain sketches for "The Book of Life."

Every detail in the "Land of the Forgotten" was thought out carefully. Here I was exploring a fountain that was planned near the grand entrance. You'll notice most of my designs are very rough. My technique for most every assignment was to explore as many ideas as I could in the short time I was given. Trying to give as many choices to the creative team as possible. I explored dozens of fountain ideas. Whimsy and fun were the artistic direction I was given.

The Book of Life: Parade Balloons 1 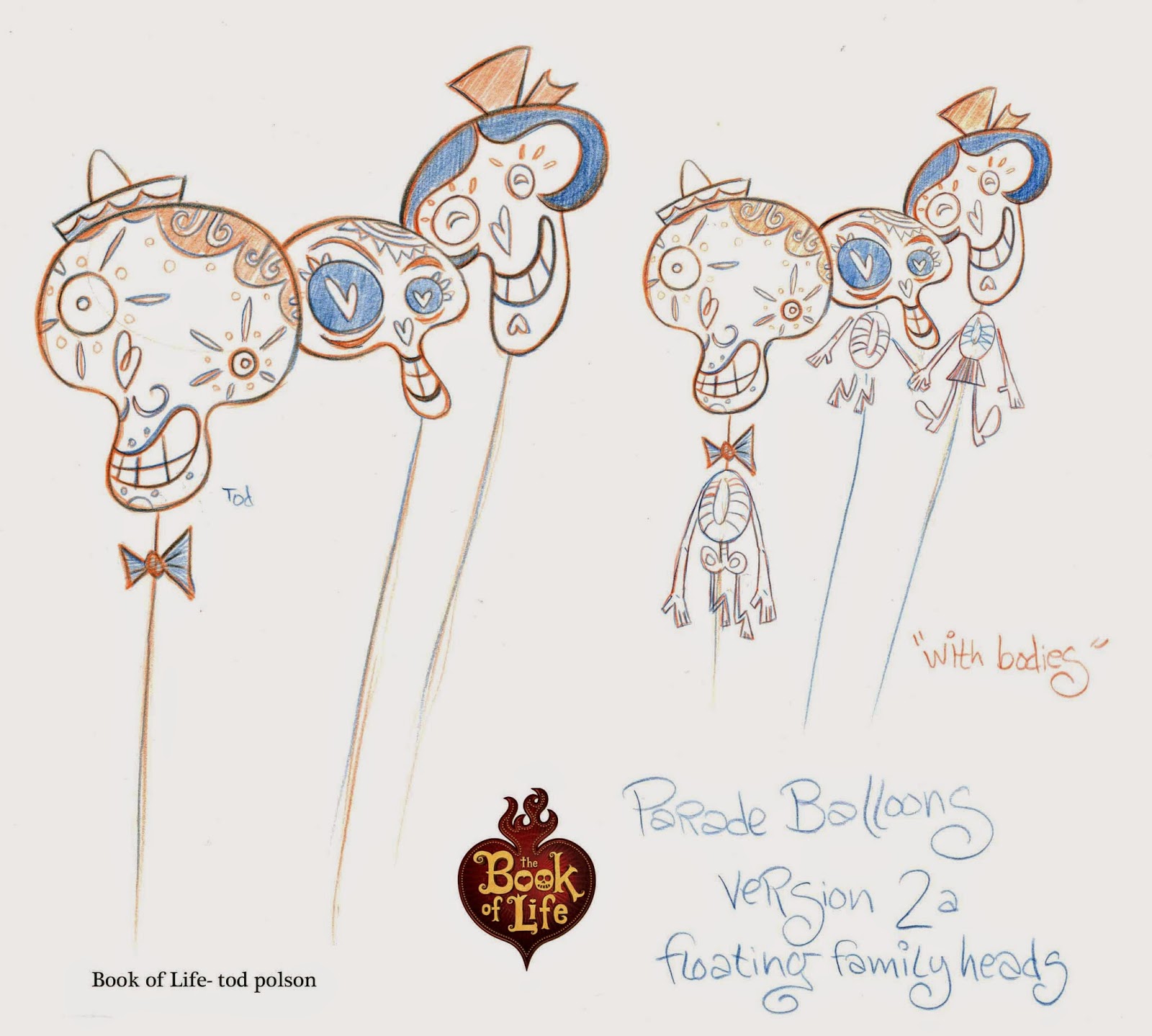 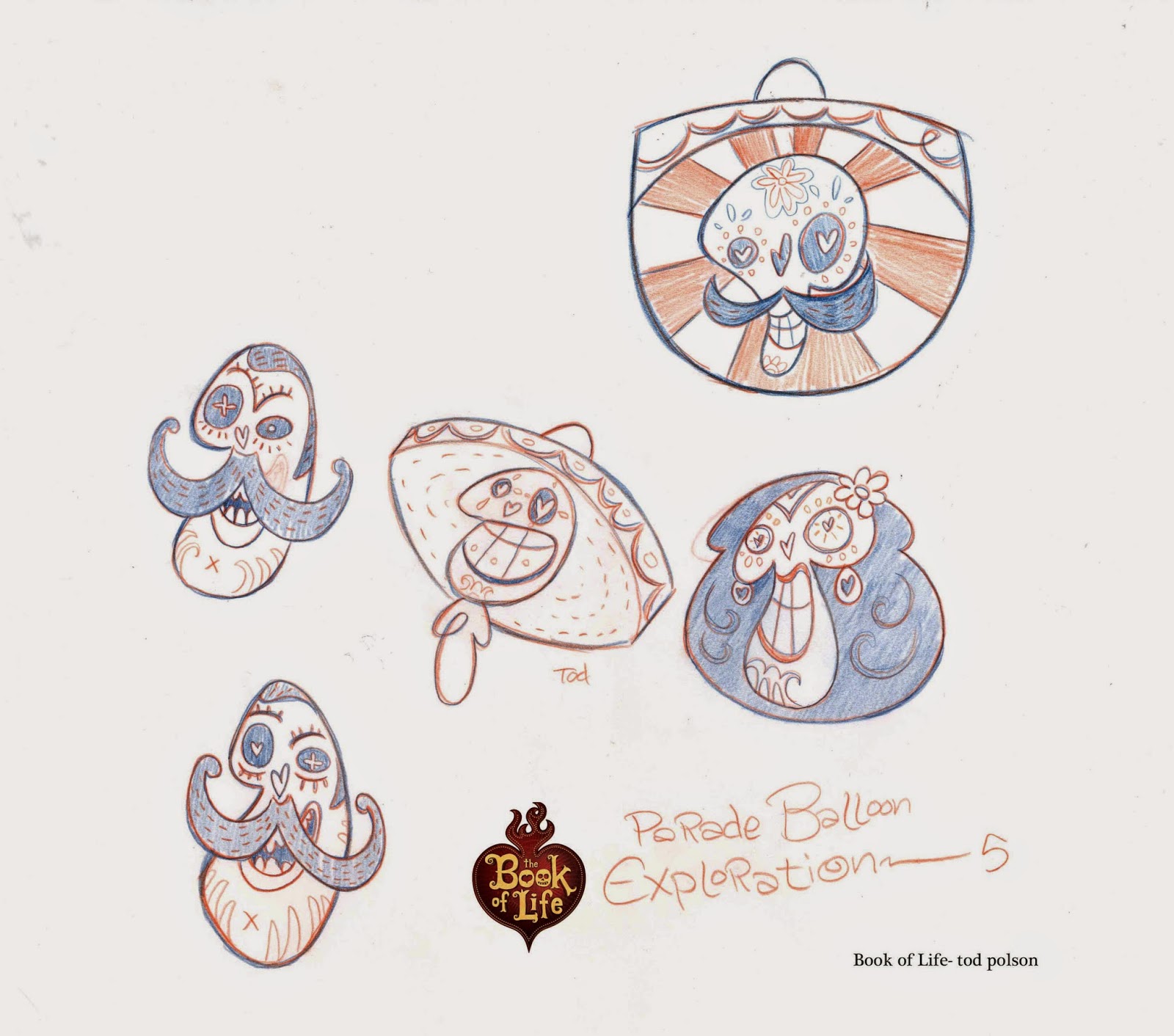 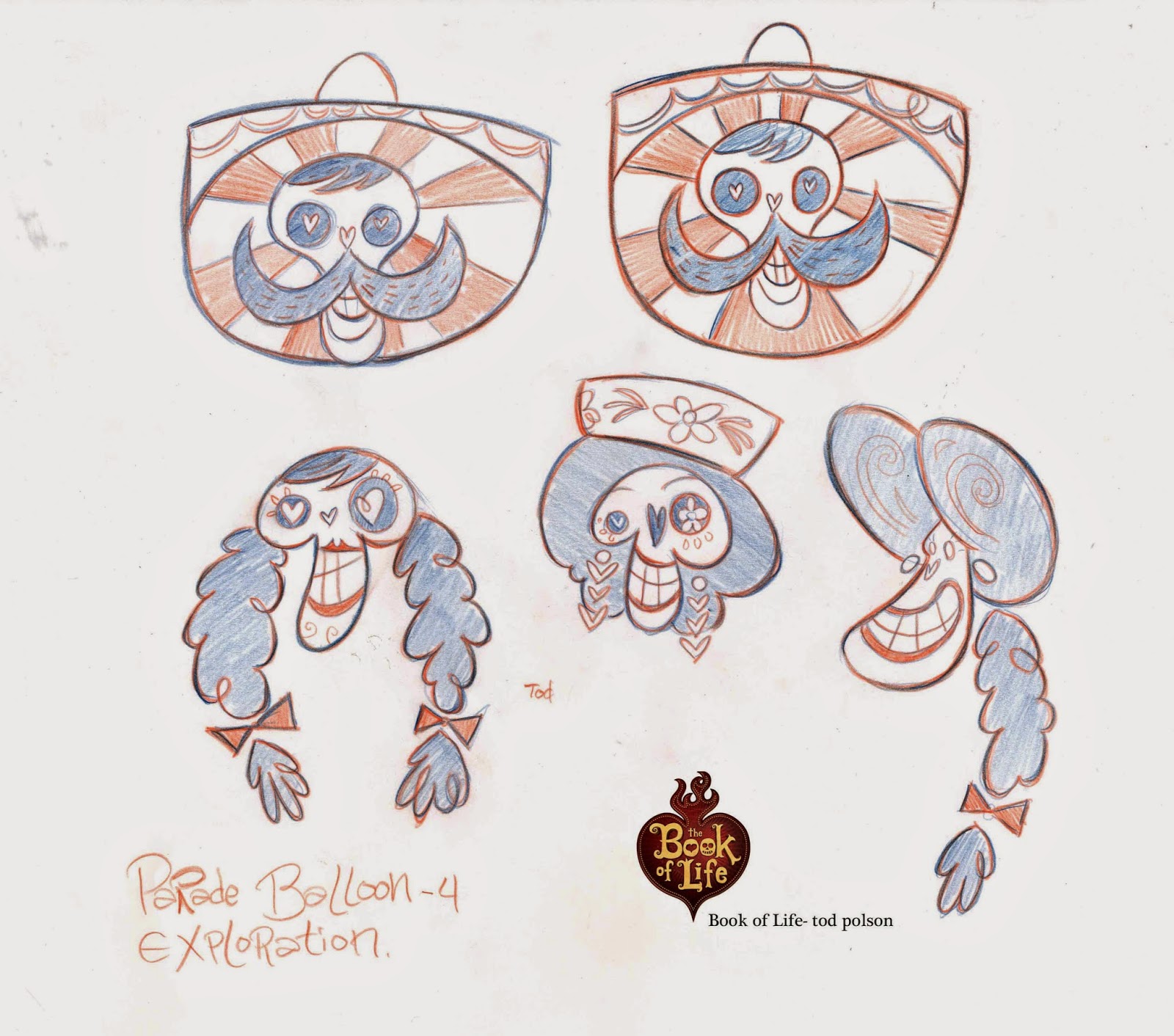 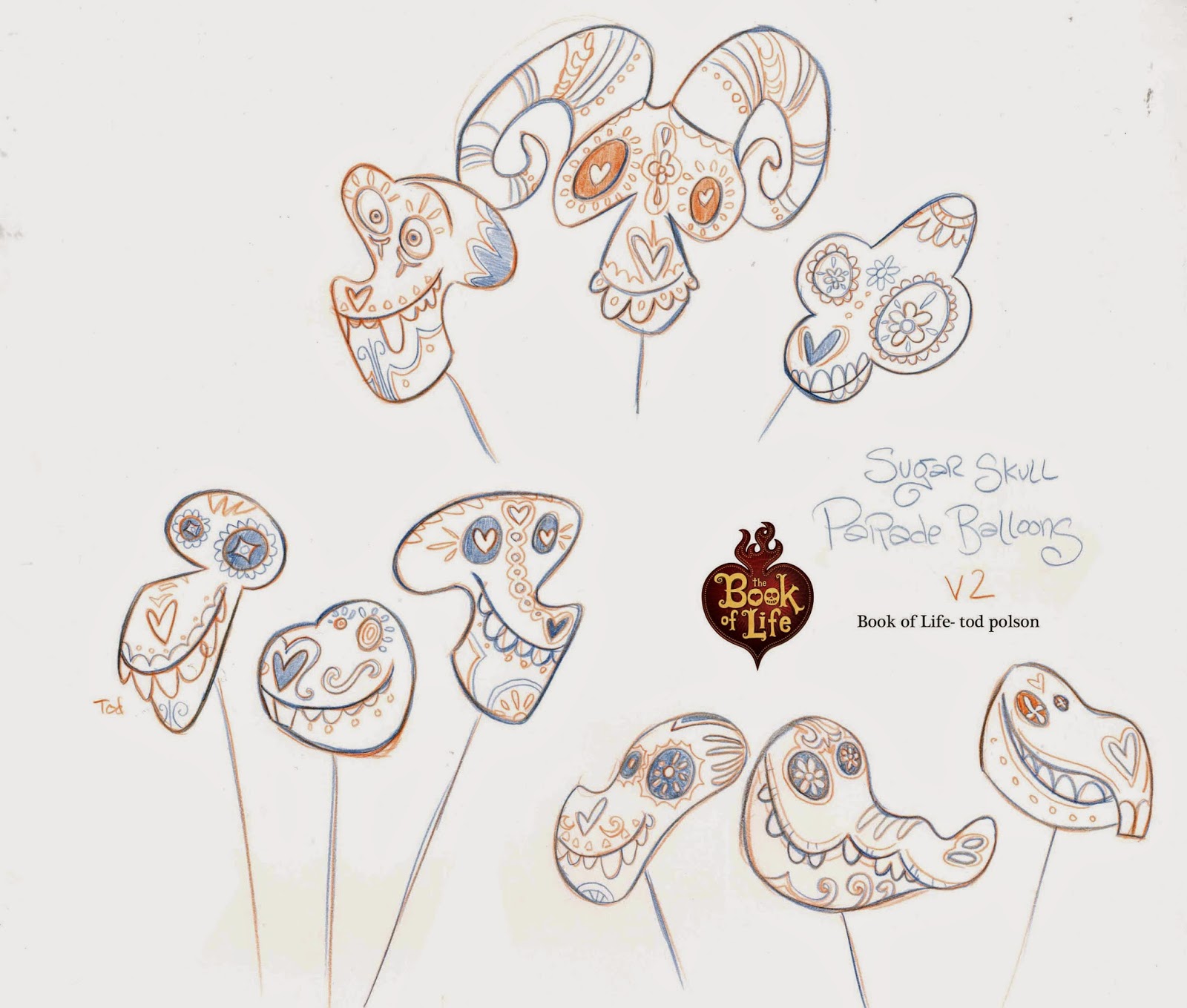 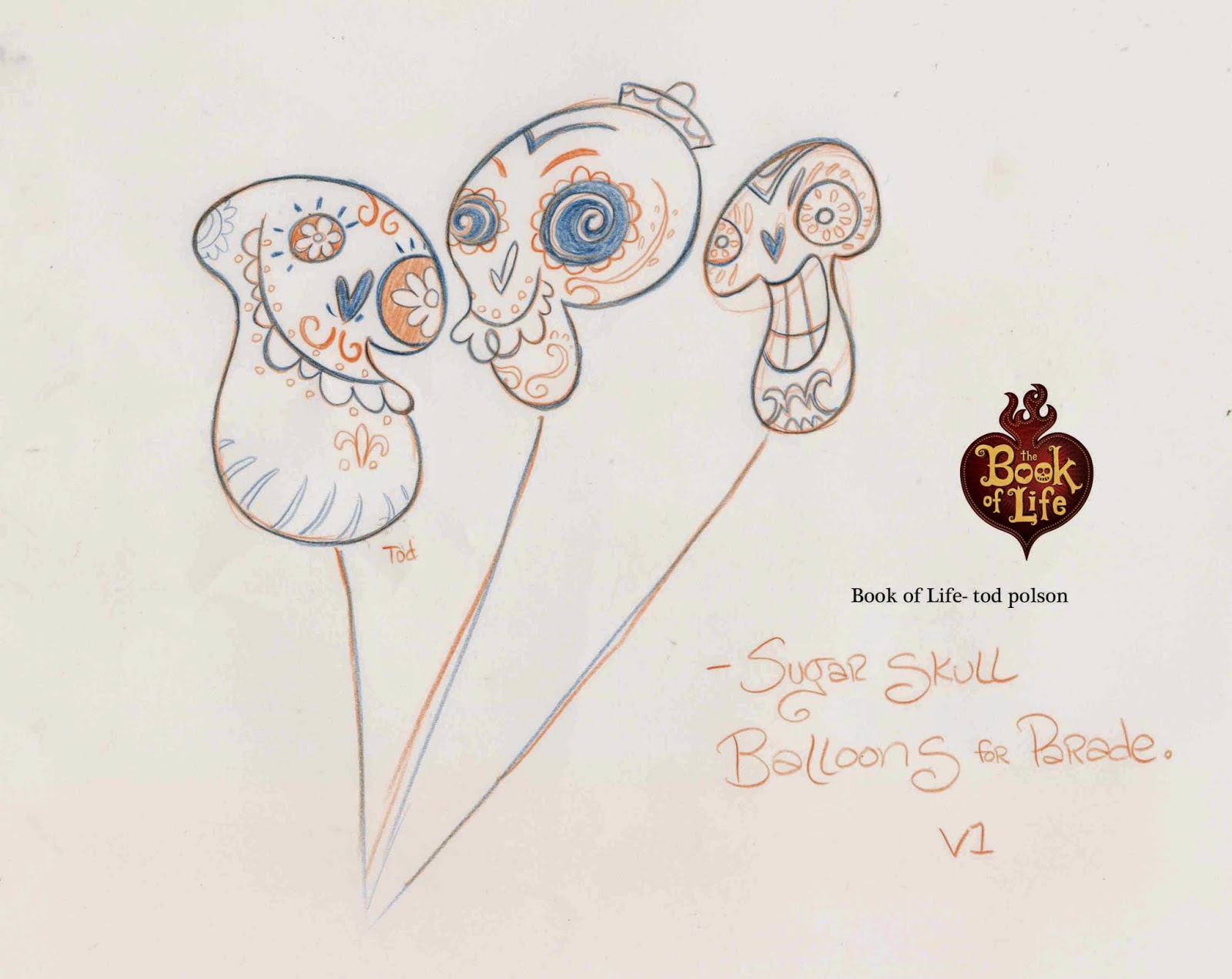 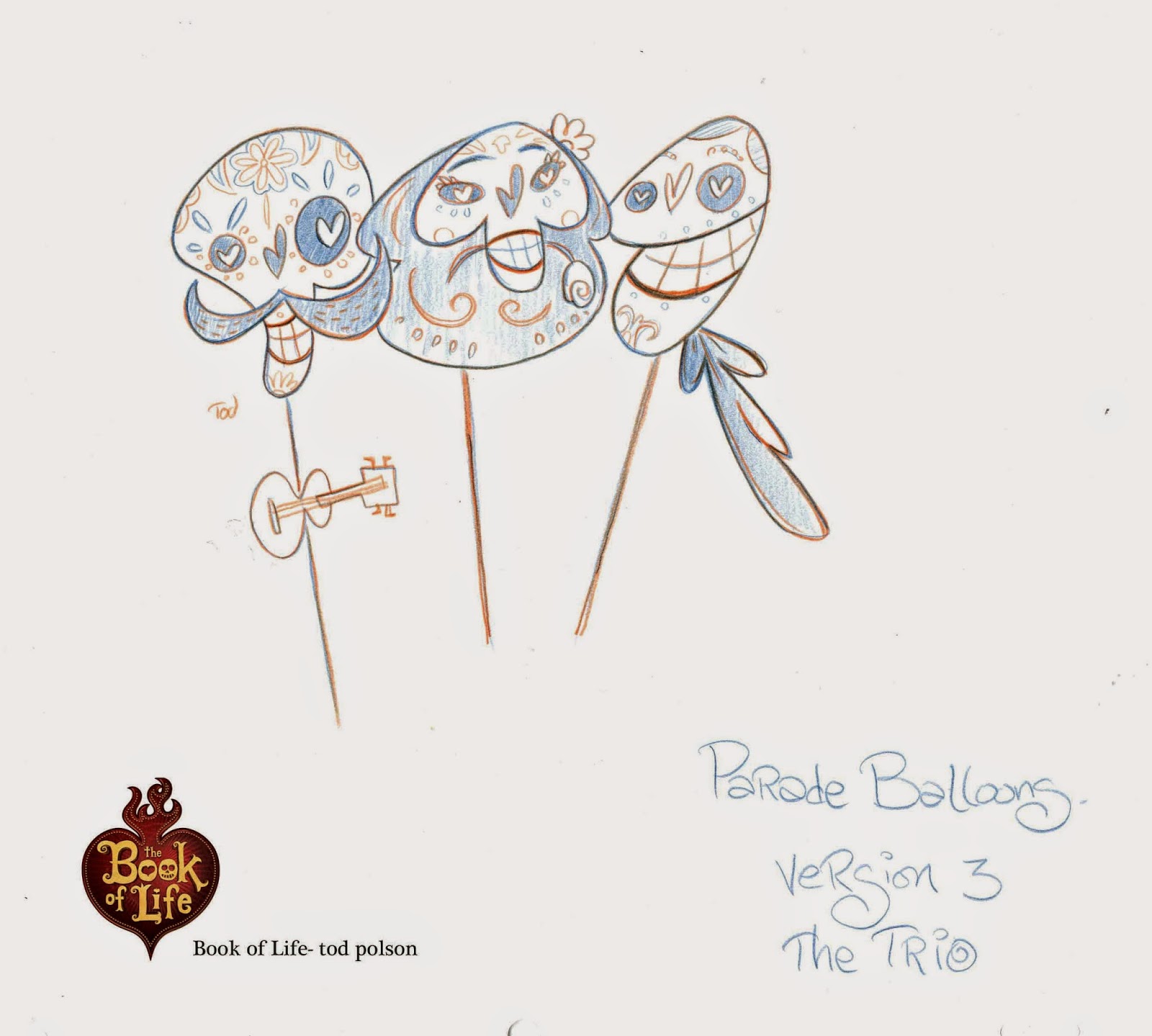 One area that I focused on in The Book of Life was the parade at the beginning of the "Land of the Remembered." Director Jorge Gutierrez imagined this land as a constant party, filled with balloons, floats... and anything remotely festive. My early balloon sketches were inspired by Mexican Day of the Dead sugar skulls.

Here I was mostly exploring shape and color. Other than art director Paul Sullivan, I was the first artist on the team to explore this world. And though most of my balloon designs were never used in the film. They helped inspire other elements, and the general shape language used.