Indian Paintbrush and the SMK exhibit

-Recently I was asked to participate in an exhibition at the Statens Museum for Kunst, part of the National Gallery of Denmark in Copenhagen. The show is called "Flowers and World Views"... For my subject I chose to paint the Wyoming state flower... the Indian Paintbrush.
Please read more about the exhibit here

Above: I made several versions of the painting, inspired by the badlands near my house in Wyoming. The badlands are in fact an ancient seabed... and fossils of fish, turtles, and even crocodiles can be found way up in the mountains. Once I picked a bouquet of Indian Paintbrush flowers for my grandmother, not knowing they were endangered, and illegal to pick. Luckily she was kind enough not to turn me in to the authorities. I've not picked them since. -tod
Posted by Tod at 9:01 PM 1 comments

Long ago, in my 21st year I went on a summer internship creating bumpers for a major network. Bumpers are of course the short pieces of film that often come before and after a commercial break. The agreement with the studio was to create five approved bumpers for my internship. I had already produced several bumpers for the TV show "Home Improvement" during my school days... So I figured these bumpers wouldn't be too difficult. 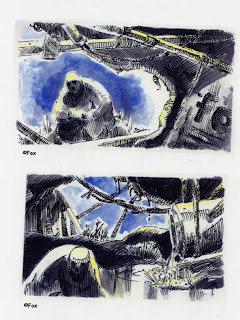 The key phrase was "approved" bumpers. My fellow interns and I kept pumping out ideas and sketches... which of course were never approved... because the studio was going to get as many ideas out of us as possible. Days turned into weeks... and weeks into months. Soon the summer was over with dozens of good bumper ideas... but still no approvals... for any of us. We left. 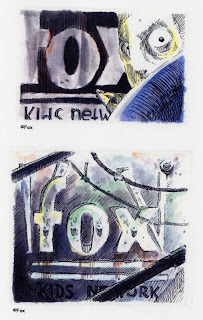 Above: Quick concept sketches for a proposed action/horror theater. The character would turn to camera and under his breath.... whisper "FOX!"

The above sketches were inspired by the great Italian comic artist Paolo Eleuteri Serpieri.  A style I was still trying to grasp at the time. This series was one of many, many looks I tried out that summer. More examples of those to come...  tod
Posted by Tod at 6:00 PM 1 comments