A clip from my student film, made under the guidance of my mentors Jules Engel (UPA, Cal-Arts), and Maurice Noble (Warner Bros). With narration by Maurice Noble, and music by Bill Benson. Additional animation by Mike Polvani, and Ben Jones. This year marks sort of an anniversary for "Al Tudi Tuhak" so I thought I would put a bit of it up.

When I first moved to Los Angeles I saw a show of masks from the Northwest coast of the U.S. The power and simplicity of the design inspired me to create a short film using Northwest coast story and design as a theme. Several of the Northern stories I researched mentioned the "creator"... or "father of Raven"... but I found no stories specifically "the creator" himself. So, I wrote a story trying to capture the depth and feel of a story from long ago. 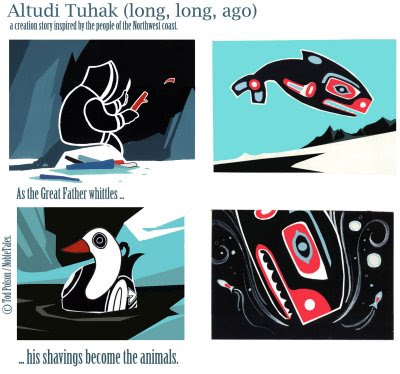 Above: Development art presented to the board at Cal-Arts in order to get "Al Tudi Tuhak" approved as my thesis.

My pal, musician Bill Benson and I traveled to Seattle for research. There we were honored to meet with Upper Skagit tribal elder/ storyteller Taqʷšəblu (Vi Hilbert). She really liked the story, and named the film "Al Tudi Tuhak"... which in the Lushootseed language means "... long, long, ago." I am not native American, and I had gradually began to feel more and more uncomfortable using native motifs. Taqʷšəblu encouraged me to make the film the way I felt it should be made. "We are storytellers, the stories find us... we don't find them. If you honor the spirit of our people, and yourself, you have done nothing wrong... the story must be told"

I shot the film on 35mm... using house paint, and cut-out paper... using a very simple style. Unfortunately at the moment I have no clean digital copies. Someday I hope to re-transfer the film using modern technology.

"Al Tudi Tuhak" toured the festival circuit for a few years, winning the student "Oscar", and receiving an "Annie" nomination.
Posted by Tod at 7:15 PM 2 comments